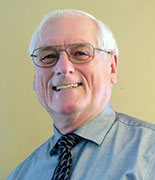 Larry is a Graduate of Central Michigan University. He earned his Bachelor of Science in Business Administration with a major in Marketing and is a Graduate of the REALTORS Institute of Michigan.

Larry worked for Otsego County Realty S in Gaylord from the fall of 2007 to the end of 2016. Larry has been in the top 5% Coldwell Banker Real Estate Sales Associates Internationally and has qualified for their International President’s Circle and International Diamond Society Awards.

Larry acted as an Associate Broker for RE/MAX Up North during 2017 and won their 100% Club Award for outstanding performance.

LARRY SCANLON is a past "REALTOR of the Year" for the Water Wonderland Board of REALTORS.

He is married to his wife Diane, who works with him as a Personal Assistant. They have been married for 21 years. Larry and Diane have 10 children and 18 Grandchildren.

When Larry is not at the office he enjoys spending time with his children and grandchildren. He also enjoys fishing, camping as often as possible. Larry is also an active member of the E-Free Church of Gaylord.